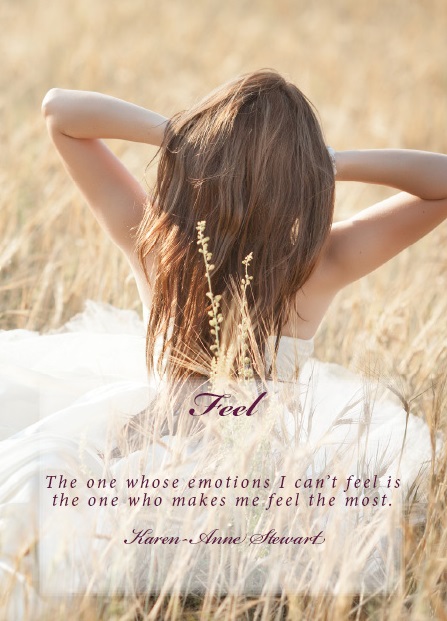 The one whose emotions I can’t feel is the one who makes me feel the most.

Jensen always told me I was strong, but I didn’t believe him until I was forced to be strong on my own, and I kept breathing without him. I’ve taken 42 million breaths since the moment he sent me away. Now, four years later, he’s standing in front of me, and I can barely breathe.

This isn’t just a story about the abilities I possess; it’s a story about something much stronger…the love of the man who possesses every part of me.

***Disclaimer – Feel is intended for readers 18+ due to strong language, mature scenes, and some violence.

“Karen-Anne Stewart’s writing always captivates me from the word go….Every character, even the secondary characters are so well developed, that they become so much more to me than characters in a story, and instead feel like long-lost friends. It is the sign of a really good author that they can invoke this feeling in their readers, and Karen-Anne Stewart never fails to deliver.” Sorcha O’Dowd – Old Victorian Quill

“Karen-Anne Stewart writes with grit. There is a boldness to her style that cuts through the social niceties with hardcore dialogue, brutal physical violence and sizzling passion. Ms. Stewart will sucker punch you with scenes that will make you cringe, melt your heart and frustrate the heck out of you, all within a few pages. She colors her main characters in vivid tones…each supporting character gets their own unique shade and together the effect is a kaleidoscope of colors. The world she has invented is often dark, sometimes frightening, but always memorable as she reveals each nugget of detail with precision, notching up the tension, heat and emotion. If this author can think it, she can write it, so expect to be taken completely out of your world and to walk on the wild side in hers.” Dianne – Tome Tender

“Ms. Stewart develops top-notch bestseller list quality work! NO JOKE! The way that she can weave words together easily sucks you right into the story.” Jamie Roberts – Reading, Eating, and Dreaming

Author of New Adult Romance who doesn’t shy away from writing about sensitive issues and hot heroes.

Karen-Anne Stewart has always adored reading and has now fallen in love with writing. Her written works are The Rain Trilogy: Saving Rain, Healing Rain, and After the Rain, and the newly released stand alone novel, Ash to Steele. Her debut novel, Saving Rain: The First Novel in The Rain Trilogy, was a nominee for the Book Junkie’s Choice Awards, and Saving Rain and After the Rain were nominees for the 2014 RONE Awards.

When Karen-Anne isn’t writing, she enjoys spending time with her family and friends, hiking, and visiting new places. She fuels her addiction of creating new stories by her only other addiction, caffeine, and listening to a myriad of musical genres. Tucked away near the Blue Ridge Mountains, Karen-Anne lives with her husband, daughter, three dogs, and their cat. She plans on writing new adult romance as long as her fingers maintain dexterity.

This site uses Akismet to reduce spam. Learn how your comment data is processed.